there is a Exempt Securities from Act of 1933?

The Securities Act of 1933 is a piece of federal legislation, so it's not surprising the federal government is not required to follow it. That's right, government securities are exempt from this act. T-Bills, T-Notes, T-Bonds, STRIPS, and TIPS are not required to be registered.

States, counties, and cities those who issue municipal securities also got an exemption from the registration process under the Securities Act of 1933. 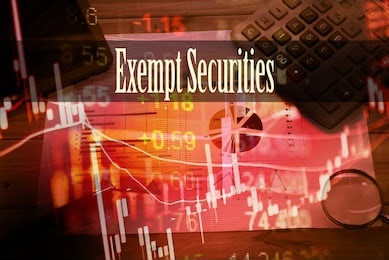 The federal government generally does not exert that much control over any State or local government, and municipal governments are not as likely to go bankrupt as corporations. So, if a school board puts out an issue of municipal securities based on fraudulent financial statements, the SEC could go after them in federal court. But, these municipal securities issuers do not file registration statements with the SEC and wait for the SEC to tell them it is okay to proceed.

Bank securities, which are already regulated by bank regulators (FDIC, FRB, and Comptroller of the Currency).

Securities issued by Small Business Investment Companies (SBICs) are also exempt, since they are only offered and sold to institutions and other sophisticated investors who don't require so much protection.

Short-term debt securities that mature in 270 days or less , commercial paper, bankers' acceptances, other promissory notes are also exempt from this registration process.

If a corporation had to get through the registration process just to borrow money for a few days, weeks, or months, interest rates would likely have moved before the deal could be completed. On the other hand, if they want to borrow money for several years by issuing bonds or sell ownership stakes, the regulators feel maybe they ought to slow down and reveal material facts to investors.