By Tamer Hamed - December 06, 2018
To earn a higher interest rate than what their bank offers on savings or checking accounts, many bank customers put relatively large amounts into certificates of deposit or CDs. These are long-term deposits that pay higher rates of interest if the depositor agrees to leave the funds untouched during a certain time frame. 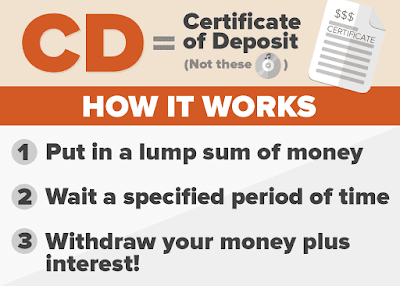 CDs are typically offered in terms of three or six months, and for as long as one, two, three or five years. Those are typical terms, but savers can find certificates of deposit with terms as short as seven days or as long as 10 years. Obviously, the bank would have to entice someone with a higher rate to get him to agree to leave a large deposit untouched for 10 years. And, a saver, on the other hand, could not expect a high rate of return when locking up funds for a mere seven days. Investors agree not to withdraw funds until the CD matures, which is why CDs usually offer higher yields than a regular savings account. As with any fixed-income investment, rates typically increase with the length of deposit terms.
Deposits in bank CDs are backed by the Federal Deposit Insurance Corporation for up to $250,000 per depositor and ownership category, per insured bank. Bank CDs are insured by the FDIC just like other bank deposits, so this is about as safe as "safe money" gets. As you might imagine, the yields on these government-insured deposits are also modest. Then again, for the liquid part of one's portfolio, bank CDs are often appropriate.
The drawbacks include the fact they are long-term deposits, not as liquid as a savings account or a money market mutual fund. If the individual wants her money out now to cover a roof replacement, she will be penalized and probably lose all or most of the interest she was going to make. Bank CDs are not bonds to be traded on the secondary market. CDs don't do much to protect purchasing power, either, but they are great at maintaining an investor's needs for liquidity and capital preservation. The rates offered on certificates of deposit can change every week.
A $250,000 investment is equally safe in a T-Bill or a bank CD. Above that amount, the T-Bill is safer. And, either way, T-Bills are securities that can be bought and sold any day the securities markets are open, while CDs, on the other hand, are commit¬ments to keep money on deposit for a specified length of time.
Negotiable/Jumbo CDS
Some investors step outside the realm of FDIC insurance and purchase jumbo or negotiable CDs. The denominations here are often several millions of dollars. Therefore, jumbo CDs are usually not insured by the FDIC but are, rather, backed by the issuing bank. That makes their yields higher.
Pulling out of a bank CD usually leads to a forfeiture of interest. On the other hand, with CDs investors have a negotiable security they can sell to someone else. That makes the security liquid, but not immune to investment loss.
SIE Exam Preparation