By Tamer Hamed - December 06, 2018
Insurance-based products provide financial protection. Investments in money market securities provide a rainy-day fund that earns interest and can be tapped in an emergency without having to sell at a loss. To earn higher rates of return, investors purchase longer-term debt securities.
Businesses borrow money short-term by issuing money market securities. To borrow from investors long-term, companies issue fixed-income securities that are usually called bonds. Businesses sell stock to some investors and bonds to others, forming their capital structure. 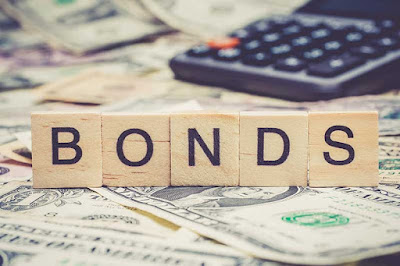 Equity investors are owners; bond investors are loaners. Loaners are creditors who must be paid their interest and principal on time but don't get a vote in corporate management decisions. Owners don't have to be paid anything, but their potential reward is much bigger than those who buy the company's bonds.
For the issuing company, there are advantages and disadvantages to both types of financing. Equity financing gives the business breathing room since there are no interest payments to meet. But, equity investors take a share of profits, have a voice in corporate matters, and never go away. Debt financing adds the burden of interest payments that could force the company into bankruptcy. However, if the company meets the interest and principal payments, the bondholders are paid off, never making a claim on the company's profits.
Corporate bonds are debt securities representing loans from investors to a corporation. Investors buy the bonds on the primary market, and the corporation pays them interest on the loan until the principal amount is returned with the last interest payment at the end of the term.
The bonds are liquid, meaning the lenders can sell the bonds on the secondary market if they need to convert to cash. But, when they sell the bonds, investors could receive less (or more) than they paid for them.
That is what separates long-term bonds from bank deposits. Even if both T-bonds and bank CDs are guaranteed by the US Government, the T-bond is a security whose market value is subject to fluctuation.
That is also why the yields are typically much higher, as we saw when looking at the yield curve.
A corporation issuing bonds is using leverage.
A company with a leveraged capital structure has financed operations by issuing debt securities or taking out long-term bank loans.
A bond has a specific value known as the par value or principal amount. Since it's printed on the face of the certificate, it is also called the face amount of the bond. Bonds usually have a par value of $1,000 and, occasionally, $5,000. This is the amount an investor will receive with the last interest payment from the issuer. Up to that point, the investor has only been receiving interest payments against the money he loaned to the corporation by purchasing their bond certificates.
The bond certificate has "$1,000" or whatever the par value is printed on the face, along with the interest rate the issuer will pay every year. This interest rate could be referred to as the coupon rate or nominal yield. Whatever it's called, the income that a bondholder receives is a fixed, stated amount. If they buy a 5% bond, investors receive 5% of the par value ($1,000) every year, which is $50 per year per bond. In other words, if he owns $1,000,000 par value of a bond with a 5% nominal yield, the bondholder's interest income is $50,000 a year. Typically, that would be received as two semiannual payments of $25,000.
Types of Maturities
If an issuer issues bonds that all mature on the same date in the future, we call this a term maturity. On the other hand, if the bonds are issued all at once but then mature gradually over time, we call this a serial maturity. Municipal bonds are often issued as serial maturities. In this case, the municipality floats, say, a $50,000,000 issue in which a portion of the bonds will mature each year over, say, 20 years. The longer out the maturity, the higher the yield offered to those investors, and the lower the yield offered on the bonds coming due in just a year or two.
In a balloon maturity, some of the bonds issued come due in the near-term, while most of the principal is paid off all at once, usually at the final maturity date.
Types of Fixed-Income
Credit Ratings
So, bond prices rise and fall based on interest rate movements. And, their market prices also depend on their perceived credit risk. Nothing worse than lending a corporation money and then finding out they are not going to pay you back. This is known as a "default," and it's the worst thing that can happen to a bond investment.
How likely is it that a bond will go into default? Isn't going to happen on a United States Treasury security. It might happen on some municipal securities. But when you get into the category of corporate bonds, you see it happens more than you'd like.
Luckily, Moody's, S&P, and Fitch all assign bond ratings designed to help investors gauge the likelihood of default. The highest quality issuers have AAA/Aaa (S&P/ Moody's) ratings. The investment grade issues go from AAA/Aaa down to BBB/ Baa. And below that, we're looking at high-yield or junk bonds. 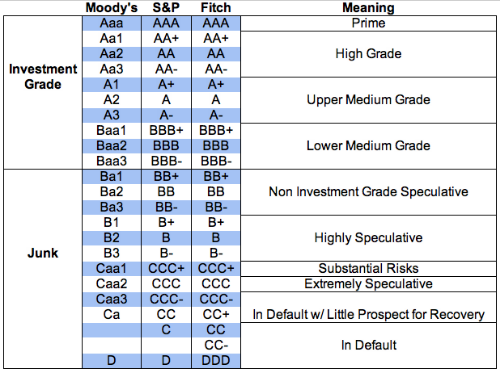 There is also a "D" rating indicating the bond is already in default. Only the savviest and most aggressive bond traders would trade a bond rated that low.
Credit quality is the highest on the AAA/Aaa-rated bonds. As credit quality drops, you take on more default risk, so you expect to be compensated for the added risk through a higher yield. High yield and low quality go hand in hand, just as low yield and high quality do. How does a bond become "high yield" or 'junk"? That means a new issue of low-rated bonds offers high coupon rates to get an investor interested in lending the money, and existing bonds trade at lower and lower prices as people get nervous about a possible default. As the price drops, the yield increases.
When S&P, Moody's, or Fitch downgrade an issuer's credit rating, the market price of those bonds drops, increasing their yield. We saw that with the bonds that financed the ballpark used by the New York Mets.
SIE Exam Preparation