By Tamer Hamed - December 03, 2018
People often talk about the economy in terms of whether it is good or bad. But, how do we measure something as big and complex as the American economy? One way is by tracking Gross Domestic Product (GDP). As the name implies, Gross Domestic Product measures the total output of a nation's economy.
It's an estimate of the total value of all goods and services produced and purchased over a three month period. If the GDP number comes in at 3%, that means the economy grew at an annual rate of 3% over the financial quarter. If GDP is 2%, the economy is shrinking at an annual rate of  2%. The GDP numbers that are factored for inflation are called "real GDP."

Gross Domestic Product (GDP) Business Cycle . Measures the value of goods and services produced and provided by workers stationed in the United States over a financial quarter. If GDP is increasing, the economy is growing. If GDP is declining, so is the economy. 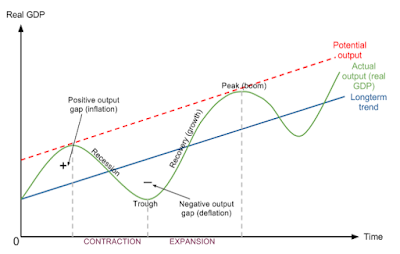 The period between the peak and the trough is called either a recession or a depression, depending on the severity.
A depression is more prolonged and severe than the more frequently occurring recession. One definition of a recession is two consecutive quarters of inflation-adjusted GDP decline.

As the former head of the San Francisco Federal Reserve Bank explains, "Economists use monthly business cycle peaks and troughs designated by the National Bureau of Economic Research (NBER) to define periods of expansion and contractions".

The NBER website lists the peaks and troughs in economic activity starting with the December 1854 trough. The website also defines a recession as:
A significant decline in economic activity spread across the economy, lasting more than a few months, normally visible in real GDP, real income, employment, industrial production, and wholesale-retail sales. A recession begins just after the economy reaches a peak of activity and ends as the economy reaches its trough. Between trough and peak, the economy is in an expansion. Expansion is the normal state of the economy; most recessions are brief and they have been rare in recent decades.

While there is no standard definition of a depression, economists generally consider a depression to be a more severe and prolonged version of a recession. For example, the Great Depression involved two severe economic downturns. The first lasted from August 1929 all the way through February 1933. After an expansion lasting 21 months, the economy went into a depression again, this time lasting from May 1937 all the way to June 1938.

Stocks of companies operating in certain industries are more dependent on this business cycle than others. These cyclical stocks tend to perform well during an expansion but poorly during a contraction.

Cyclical industries involve expensive purchases and include: heavy equipment, steel, automobiles, durable goods such as refrigerators and dishwashers, travel, and aerospace. Large purchases are what consumers and businesses cut back on first when the economy hits a rough patch. During a robust economy, consumers begin purchasing new cars and refrigerators once again.

Other industries can survive a contraction more easily and are, therefore, called defensive or non-cyclical. These industries include: food, clothing, pharmaceuticals, healthcare, alcohol and tobacco. Food is a defensive industry.

That's not what we mean. We mean supermarkets and food supply companies. Restaurants get clobbered in a recession, as they are one of the first items consumers reduce or eliminate from their budgets. Similarly, clothing is a defensive industry, but we don't mean designer suits, which people cut back on in a recession. We mean the basics, like underwear, socks, gloves, and T-shirts.

If the industry space does better during a recession, it is considered counter-cyclical. Counter-cyclical stocks are negatively correlated to the business cycle. During a contraction, they thrive. During an expansion, they struggle.

There are not many types of business models that improve when consumers have less money to spend, but during a period of high unemployment employment placement agencies typically see an increase in revenue.

Similarly, education and training companies who prepare people for careers in automotive, electronics, or nursing, etc. are also counter cyclical. When people lose a job, they tend to find other careers that they are willing to pay to enter.

While counter cyclical stocks do well during a contraction, they also suffer during expansions. And expansions typically last longer. If unemployment is low, the two types of companies mentioned would see their revenue decrease.

On the other hand, some companies do better when interest rates rise. For example, banks, insurance companies, and certain broker-dealers often earn higher profits when interest rates increase, especially if the yield curve is steep. Broker-dealers make much of their profits by holding customer cash and earning interest on it until the customer buys stock or requests a withdrawal. The steeper the yield curve, the better the profits, as it is for banks and insurance companies.

So, the same economic climate produces winners and losers. During a recession, car makers and high-end retailers may suffer, but Wall-Mart and Priceline might report higher profits as Americans suddenly become cost-conscious. When interest rates rise, utility companies and heavy equipment makers might get hurt while, on the other hand, banks, insurers, payroll and certain broker-dealers might report better results.

How does the investor know when the recessions and recoveries are about to appear?
He doesn't, but the stock market is always about speculation.

Finally GNP (Gross National Product) counts the production of U.S. workers stationed here as well as working overseas for American companies. It does not count the production of, say, Japanese citizens working at a Toyota or Mitsubishi plant in Mississippi.

Gross Domestic Product counts what is produced domestically, by both US. Workers and foreigners working here in the United States.

So, GNP tells us how much American workers are producing wherever they're stationed, while GDP tells us what is produced here in America, whoever is doing that work.
SIE Exam Preparation