Tax-deferral is an advantage offered by deferred annuities and retirement accounts. Whether one's contribution is tax-deductible, the fact that the interest, dividends, and capital gains will not be taxed each year is an advantage to the investor. That's why so many individuals participate in at least one retirement plan.

Some retirement plans are started by the individual, and some are offered through an employer.
Let's start with the plans an individual can open, provided he has earned income. Earned income includes salary, bonuses, tips, alimony, and any income derived from actively participating in a business. It does not include passive income such as rental income from an apartment building or portfolio income such as bond interest, dividends, or capital gains.

If he does have earned income for the year, an individual can contribute 100% of that amount up to the current maximum. So, if she earns $1,800, then $1,800 is her maximum IRA contribution for that year. People 50 years and older can add a catch-up contribution. That amount is currently an extra $1000. the maximum contribution to a Traditional IRA is $5,500, $6,500 for those 50 or older.

Penalties
Over-funding an IRA results in a 6% penalty on the amount above the maximum contribution for the year and any earnings associated with it. If the individual realizes she has over-funded her IRA for the year, she can remove the excess by the tax filing deadline the following year, or re-characterize the excess as part of the following year's contributions. If it's March 17, 2019 when she realizes she has over-funded her IRA by $1,000 for 2018, she can remove the $1,000 to avoid a penalty or fill out a form to re-characterize it as part of her 2019 contributions. If she does nothing, she pays a 6% penalty on the $1,000 ($60) plus any earnings associated with it.

Money withdrawn from a Traditional IRA is taxable at ordinary income rates. While we can pull the money out any time, if we take it out before age 59.5, we'll pay a 10% penalty, on top of income taxes on the full amount. However, the following are qualifying exemptions to the 10% penalty. Although the withdrawal is taxable, the 10% penalty is waived for withdrawals made pursuant to:
•    Death
•    Permanent disability
•    First home purchase for residential purposes
•    A series of substantially equal periodic payments under IRS Rule 72-t
•    Medical expenses
•    Higher education expenses 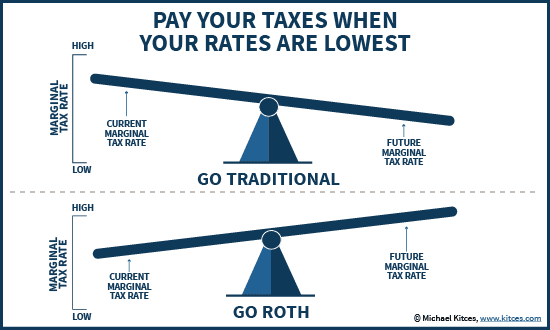 A withdrawal pursuant to death means that the IRA owner has died and someone else is receiving the account balance as a named beneficiary. The beneficiary will be taxed but will not be penalized because the account owner died before age 59.5.

So, an individual can't have the money until he's 59'/s without paying a penalty unless he uses one of the exemptions above. That's on the front end.

On the back end, he also is required to start taking it out by the time he's 701/2. If not, the IRS will impose a 50% insufficient distribution penalty. We're talking about RMDs here, or required minimum distributions. When someone turns 70.5, he has until April 1st of the following year to take out at least the required minimum distribution. If not, the IRS will levy a 50% penalty. That's 50% of what he should have taken out at this point, not half the account value.

The absolute latest date that an individual can take his first withdrawal from a Traditional IRA without penalty is April 1st following the year he turns 70.5. However, if he does that, he must take two distributions that year, which can push him into a higher tax bracket and make more of his social security benefits taxable. So, it's easier to take the first distribution in the year the individual turns 701/2. Unlike the Roth IRA, no contributions can be made into the Traditional IRA after age 701/2.

Roth IRA
The Roth IRA is funded with non-deductible contributions. However, the money comes out tax-free in retirement if the individual is 59'/s years old and has had the account at least 5 years. That means if the individual starts the account at age 56, he'll have to wait until age 61 to take tax-free withdrawals.
The withdrawals we take from a Traditional IRA are taxable income. If we withdraw $30,000, we might only keep $22,000 after-tax. A withdrawal of $30,000 from our Roth IRA, on the other hand, leaves us with $30,000 to spend.

Unlike the Traditional, for the Roth IRA there is no requirement to take a distribution by age 70.5. Since the IRS isn't going to tax that money, they couldn't care less when or even if it is withdrawn. In fact, individuals can keep contributing if they have earned income. So, a 72-year-old can refrain from taking Roth IRA withdrawals and can keep making contributions into the account if she has earned income. Neither option is available, on the other hand, for her Traditional IRA.

If the individual or married couple have adjusted gross incomes above a certain amount, they cannot contribute to their Roth IRAs. So, get those Roth IRA accounts started while you're young and before you strike it rich. The money you contribute in your 20s and 30s can compound for decades, even if the IRS cuts off new contributions by age 40 based on your income.

If an individual has both a Traditional and a Roth IRA, the contribution limit is the total allocated among the two accounts.

Also, the Roth IRA allows the individual to remove his cost basis, or the amount he has contributed, after five years without penalty. So, if the account owner has contributed $25,000 to a Roth IRA and seven years later the account is worth $40,000, he could take the $25,000 out without a penalty and keep the remainder of $15,000 in the account. He could not put that $25,000 back in, however, and would not earn the tax-deferred and tax-free returns going forward. But, as always, it's his money.

Rollovers and Transfers
To move an IRA from one custodian to another, the best bet is to do a direct transfer. Just have the custodian cut a check to the new custodian. The IRA owner can do as many of these direct transfers as he wants. If, however, he does a rollover, things get tricky. First, he can only do one per year, and, second, it must be completed within 60 days to avoid tax ramifications.

In a rollover, the custodian cuts a check in the individual's name. The account owner cashes it and then sends the money to the new custodian, but any shortfall is subject to taxes and a 10% penalty. If the individual withdrew $50,000 but could only come up with $10,000 sixty days later, that $40,000 difference is taxed as ordinary income, plus a penalty tax of $4,000.