By Tamer Hamed - December 03, 2018
People often talk about the economy in terms of whether it is good or bad. But, how do we measure something as big and complex as the American economy?

One way is by tracking Gross Domestic Product (GDP). As the name implies, Gross Domestic Product measures the total output of a nation's economy. It is an estimate of the total value of all goods and services produced and purchased over a three-month period. If the GDP number comes in at 3%, that means the economy grew at an annual rate of 3% over the financial quarter. If GDP is - 2%, the economy is shrinking at an annual rate of - 2%. The GDP numbers that are factored for inflation are called "real GDP."

The Federal Reserve Board monitors many economic indicators to determine whether inflation is threatening the economy, or whether the Fed needs to provide stimulus to a sagging economy. The following employment indicators reveal how many people are working and how much compensation they're receiving. If people are not working, that signals an economic slowdown, and the Fed might lend a hand by lowering interest rates. If too many people are working, that signals inflation, and the Fed might cool things down by raising interest rates. 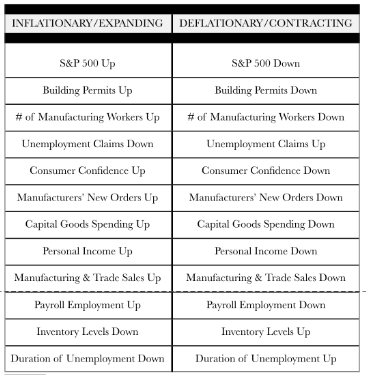 • Average Weekly New Claims for Unemployment Insurance: if people are showing up for unemployment insurance at a higher rate that is negative. If the number of new claims drops, that means economic activity is picking up positive.

• Unemployment Rate (Non-farm Payroll): also called "payroll employment." Includes full-time and part-time workers, whether they are permanent or temporary employees. Tracks how many people are working in the private sector. Released monthly. Called "non-farm" because it does not measure seasonal agricultural jobs.

A leading indicator shows up before something happens and is used to predict.
A coincident indicator tells us where we are now,
A lagging indicator gives us data about where we have just been, confirming a trend.

Lagging (confirm trends, do not predict):
•    the value of outstanding commercial and industrial loans
•    the change in the Consumer Price Index for services from the previous month
•    the change in labor cost per unit of labor output
•    inventories
•    the ratio of consumer credit outstanding to personal income
•    the average prime rate charged by banks
•    length/duration of unemployment

The table above shows what the main indicators tend to reveal to an economist. For example, if the S&P 500 is up, that means the economy could be headed for an expansion, and when the S&P 500 is down, the economy could be headed for a contraction. The "Fed" typically intervenes to smooth out the rough patches in the economy, so if they see inflationary signals, they start raising interest rates. If they see deflationary signals, they provide economic stimulus by lowering interest rates.