By Tamer Hamed - December 03, 2018
An income statement show the sales and profits are increasing, decreasing, or flattening. it can also be referred to as a "statement of earnings" or "statement of operations,"it is available to anyone who wants to see it. That includes the company's competitors, which is a reason many companies stay private. For example, if Five Guys is in secret talks to acquire another fast food chain, they would rather keep that quiet as opposed to letting McDonald's see their plans and maybe try to out-bid them. 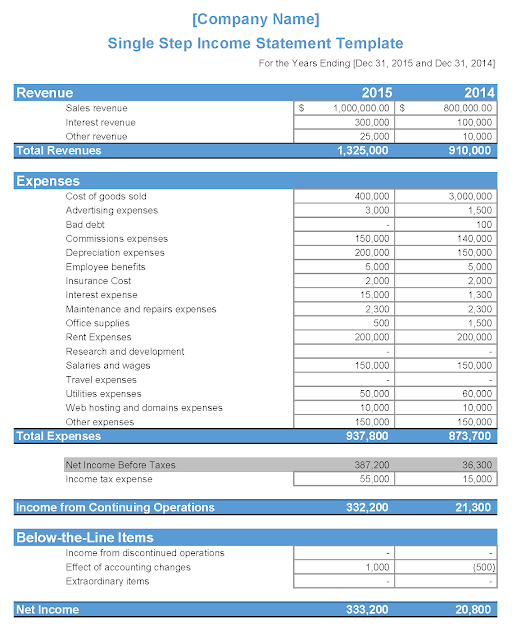 On the other hand, if McDonald's is planning to open a certain number of restaurants in Africa next year, they would have to let the investment world know about it either on their next scheduled filing or by releasing an 8K.

If you go to your favorite financial website or search for a company's "10¬K" or "annual shareholder report," you can see the financial statements for companies such as Microsoft, Oracle, and Starbucks. For now, though, let's start small.

Let's say there is an 11-year-old in your neighborhood, who launched a lemonade stand for the summer. Her name is Shelly. Each glass of lemonade sells for $1, and the dollars Shelly receives through this summer are called sales or revenue. She sells 10,000 glasses of lemonade, so the revenue is exactly $10,000 over the summer. Revenue is the top line of the income statement.

The lemonade stand had no discounting or returns, so the revenue is what it is. However, $10,000 in revenue is not the same thing as $10,000 of profit. The lemonade Shelly sold was produced by a combination of the following ingredients: purified water, fresh lemons, lemon juice, sugar, and ice. Those are the goods used to make the product sold, which is why the money spent on them is called the cost of goods sold or cost of revenue. Shelly also has to serve the product in recyclable cups, which cost $1,000, on top of the $2,000 paid for the ingredients. So, now the $10,000 in revenue is down to $7,000 after subtracting the $3,000 for "cost of goods sold."

Like any business, the lemonade stand has operating expenses to cover. Operating expenses are the expenses not directly associated with the production of the company's products: office rent, administrative salaries, office supplies, entertainment costs, travel costs, etc. While Shelly worked the stand herself most of the time, she also hired your sister to come up with some marketing plans. Her $500 of compensation represents an operating expense.

There are other operating expenses, including advertising. Advertising expense was $500 over the summer.

Operating expenses are often referred to as "SG&A' for "selling, general, and administrative" expenses. At a manufacturing company, the labor of the workers on the production floor would generally be part of cost of goods sold, since that labor goes directly into the cost of the finished product. The compensation to the so-called "white-collar workers" out in the cozy offices is part of "selling, general, and administrative" expenses.

If the lemonade stand hires baristas to serve the lemonade, their labor is part of cost of goods sold, while the compensation for her sister's marketing work is an operating expense, not directly related to producing and serving the product.

Shelly also paid the boy next door to build you a stand for $200, and that is a different type of expense. She plans to be in business for the next five years, and she will use that stand each summer. So, she subtracts 1/5 of that $200 on the income statement each year. Instead of subtracting $200 all at once, she only subtracts $40 to depreciate this vital piece of equipment. Even though the business spent the money all up front, next year it will also subtract $40 as a depreciation expense on the income statement. The accountants will do that five times until they have depreciated the cost of the stand to zero.

To depreciate an asset involves spreading its cost over its estimated useful life. A manufacturing company would not expense a $10 million piece of equipment the way they would expense the paper and toner used in the office. The latter are consumed and expenses all at once, while the equipment is slowly written down on the income statement to spread the cost over its estimated useful life.

Tangible assets are depreciated, while intangible assets are written down using amortization. If a company is manufacturing a drug under a patent with a limited life, they amortize the patent over time, as they would depreciate a plastic injection molding machine over several years. In either case, an asset's cost is being spread over its estimated useful life by taking a series of charges on the income statement through these non-cash expenses called either depreciation or amortization.

There are other assets subject to depreciation at the lemonade stand. Shelly had to buy several large coolers, a couple of blenders, a money drawer, a calculator, and a copy of Quick Books TM. These fixed assets all work out to $300, which are depreciated over three years, subtracting another $100 this year.

We have accounted for cost of goods sold, operating expenses, and depreciation.

Now, there are interest payments and taxes to account for before arriving at the company's net income or net loss for the reporting period. Shelly's mom had to spot her some credit to buy her first batch of ingredients and, unfortunately, she charges her interest on the loan. On the plus side, Shelly gets to deduct that interest before figuring taxable income, just as homeowners deduct the interest paid on their mortgages. So, she subtracts the $20 of interest, and the taxable income is $5,840. Taxes work out to $40, and after paying those, the lemonade stand shows a net profit, or net income after tax, of $5,800.

Let's review the lemonade stand's results of operations over the summer: