By Tamer Hamed - December 03, 2018
Putting cash in a coffee can might seem safe, but as prices overall rise, that cash loses purchasing power. Even when we deposit money in an FDIC-insured bank, we usually find the low rates of interest the bank pays do not keep pace with inflation. It might look as if we are earning more dollars, but because of inflation those dollars can't buy as much as they used to. We used to be able to afford a dozen eggs. Now because of inflation we can only afford ten and a half.

Inflation relates to supply and demand. When the demand for goods and services exceeds their supply, prices system-wide rise or inflate. Since many workers have no ability to raise their own paychecks, inflation is a problem. 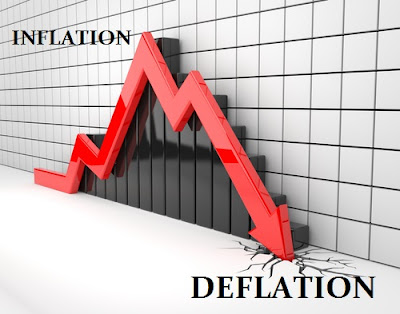 At first, maybe consumers have more money for gasoline by cutting back on snack chips. Maybe they can pay the power bill if the whole family agrees to brown-bag their lunch. While it's nice to see  families pull together, we don't like to see the snack chip company or the local restaurants lose revenue, as those companies represent hundreds or thousands of working families, as well.

With deflation at work, profit margins at businesses will be squeezed, as the companies pay last month's prices for raw materials and then struggle to sell their finished goods at next month's cheaper prices.

That's assuming they can sell anything to anyone. Would you rush out to buy something today if you knew it would be cheaper tomorrow? Wouldn't we all be tempted to put off our purchases indefinitely, waiting for the prices of cell phones, clothing, and automobiles to drop in our favor?

That would lead to lay-offs. And then those workers would have less money to spend and less confidence in their ability to buy on credit. About two-thirds of the American economy is driven by consumer spending, so if consumers aren't spending, that's a problem.

Typically, inflation and economic expansion go together, as do deflation and economic stagnation. However, as the U.S. saw in the late 1970s, sometimes the overall economy suffers high inflation even as the economy shrinks and workers experience high unemployment rates. This rare situation is known as stagflation, a blend of the words "stagnation" and "inflation."

Inflation is measured by the CPI, or "Consumer Price Index." The CPI tracks the prices consumers are paying for the basic things consumers buy (groceries, movie tickets, milk, blue jeans, gasoline, etc.) and tracks the increases or decreases in those prices.

A one-time weather event such as a hurricane could drastically disrupt production of food and oil, sending prices upward, but that one-time event would not necessarily indicate that prices are rising throughout all areas of the economy.

We'll look at the Federal Reserve Board and its The CPI represents all goods and services purchased for consumption by the reference population.

Economists also monitor the PPI, or Producer Price Index. This is a family of indices showing the prices received by producers at various stages of the production cycle: commodity level, intermediate demand, and final demand. If the CPI and PPI are revealing inflation, the Fed's Federal Open Market Committee (FOMC) will raise interest rates to let some air out of the economy.

If prices start to collapse we can end up with deflation, so "the Fed" will pump some air back into the economy by lowering interest rates.