By Tamer Hamed - December 03, 2018
Economic policy makers use monetary and fiscal policies to influence the economy. 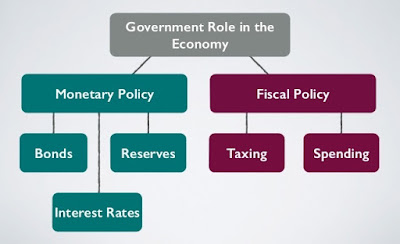 Monetary policies are enacted by the Federal Reserve Board and its Federal Open Market Committee. Monetary policies involve setting targets for short-term interest rates to either fight inflation or stimulate a sagging economy.

However, of the three main tools of monetary policy changing the reserve requirement is the most drastic measure and, therefore, the tool used least often by the Federal Reserve.

In a nutshell that means that if banks can lend out maybe $10 for every $1 they have on reserve, when the Federal Reserve Board changes the amount required to be deposited in reserve by just a little bit, the effects are multiplied throughout the financial system. The multiplier effect is calculated by taking total bank deposits divided by the reserve requirement.

The Fed's Federal Open Market Committee (FOMC) can also use open market operations and either buy or sell US. Treasury securities on the secondary market. If they want to cool things down by raising interest rates, they sell Treasuries on the open market to depress their price and, thereby, increase their yield. If they want to fuel a sluggish economy by lowering interest rates, they buy Treasury securities, thereby driving up their price, which is the same thing as pushing down their yield.

Yields and rates are the same thing. It is the price of debt securities that moves in an inverse relationship to rates/yields. We will look at interest rates and bond prices in more detail up ahead.

When people say the FOMC is raising short-term interest rates by 25 basis points, they're talking about the discount rate, which is the rate the Federal Reserve Board charges banks that borrow directly from the FRB. If banks have to pay more to borrow, they will in turn charge their customers more to borrow from them. So, if the Fed wants to raise interest rates, they just raise the discount rate and let the banking system take it from there.

The Federal Reserve Board does not set tax policy they enact monetary policy. And, typically, they only influence short-term interest rates, although if circumstances require it, they can also influence longer-term rates reflected by Treasury Notes and Treasury Bonds.

The Securities Exchange Act of 1934 covers many aspects of the securities industry. This legislation gave the Federal Reserve Board the power to establish margin requirements under Regulation T and Regulation U. These regulations stipulate how much credit can be extended by broker-dealers and banks in connection with customer margin accounts. So, as with the other tools above, the Federal Reserve Board can make credit more available or less available through margin requirements, depending on the direction of their current monetary policy.

You can think of the Federal Reserve Board/FOMC as a sort of pit crew trying to perform tune-ups on an economy that never pulls over for a pit stop. If the economy starts going too fast, they let some air out of the tires by raising the reserve requirement, raising the discount rate, and selling Treasury securities. If the economy starts to slow down, they pump some air into the tires by lowering the reserve requirement, lowering the discount rate, and buying Treasuries.

Inflation is most likely to occur during the phase of the business cycle called the "peak," a time associated with the phrase "irrational exuberance" during which too many investors and entrepreneurs are convinced that things will keep improving forever.

Fiscal policy is what the President and Congress do: tax and spend. Keynesian economists recommend that fiscal policy be used to increase aggregate (overall) demand for goods and services.

To stimulate the economy, just cut taxes and increase government spending. Reduced taxes leave more money for Americans to spend and invest, fueling the economy. If the government is spending more on interstate high-way construction, this means a lot more workers are going to be hired for construction crews. Or maybe the federal government orders military transport vehicles from a unit of GM. If so, GM will order a lot more parts from suppliers and hire more workers, who would make and spend more money to push the economy along.

On the other hand, if we need to cool things down, followers of Keynesian economics suggest that the federal government increase taxes and cut spending. Higher taxes leave less money for Americans to spend and invest, and decreased spending puts less government money into companies, who, in turn, spend less money on supplies, equipment, and salaries.