what is the Yield and its Curves?

By Tamer Hamed - December 03, 2018
Yield refers to the earnings generated and realized on an investment over a particular period of time, and is expressed in terms of percentage based on the invested amount or on the current market value or on the face value of the security.

It includes the interest earned or dividends received from holding a particular security (Debt security).

Depending on the nature and valuation (fixed/fluctuating) of the security, yields may be classified as known or anticipated. 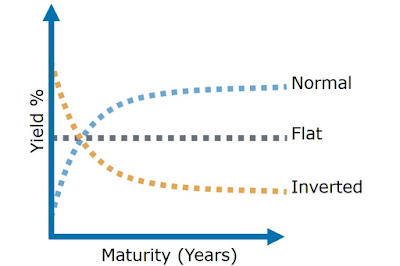 A normal yield curve implies that economic conditions are stable. For the majority of its history the yield curve for U.S. Treasuries has been in this state. Notice that though yields are higher, they also flatten out here rather than forming a steep slope. On the other hand, the test could mention a "steep yield curve" in which the curve buckles inward because the yields on longer maturities are so much higher than those on shorter maturities. This often happens before the economy goes into a rapid expansion.

The expansion phase of the business cycle often comes with higher interest rates and inflation, so fixed-income investors demand significantly higher yields on long-term bonds suddenly, causing a steep yield curve. We've seen that if the "Fed" sees inflation up ahead, they will raise interest rates. A steep yield curve suggests that this has already been factored into the bond market.

If we see the same yields among T-Bills, T-Notes, and T-Bonds, we are looking at a flat yield curve.

The yield curve typically flattens when investor expectations for inflation are so low that they are not demanding higher yields to hold long-term debt securities. This typically occurs at the end of a Fed tightening cycle. At that point the Fed raises short-term interest rates until they are in line with intermediate- and long-term rates, and temporarily, with investors expecting no immediate threat from inflation, the yields are about the same across the board. A flat yield curve is thought to signal an economic slowdown.

So, when the economy expands, the Federal Reserve Board typically goes into a series of interest-rate tightening. Towards the end of this cycle, the yield curve can often flatten, which usually signals the party is over for the economy, at least for a while.