By Tamer Hamed - January 29, 2019
A bond has a maturity date that represents the date the issuer will pay the last interest check and the principal. At that point, it's all over—the debt has been paid in full, just like when you pay off your car, student loan, house, etc. This can be referred to as "maturity" or redemption. As we saw earlier, many bonds are repurchased by the issuer at a set price if interest rates drop. So, a bond might not make it to the maturity date due to an early redemption or "call." Either way, the debt would have been retired by the issuer.

Municipal bonds are frequently callable by the issuer. Refunding a current issue of bonds allows municipalities to finance their debt at lower rates going forward. Or, there could be a covenant in the bond indenture for the current issue that is burdensome, motivating the issuer to start over. An optional redemption gives the issuer the option to refinance/refund their debt as of a certain date at a stated price, or over a series of prices and associated call dates. Some bonds are issued with mandatory call provisions requiring the issuer to call a certain amount of the issue based on a schedule or on having enough money to do so in the sinking fund. 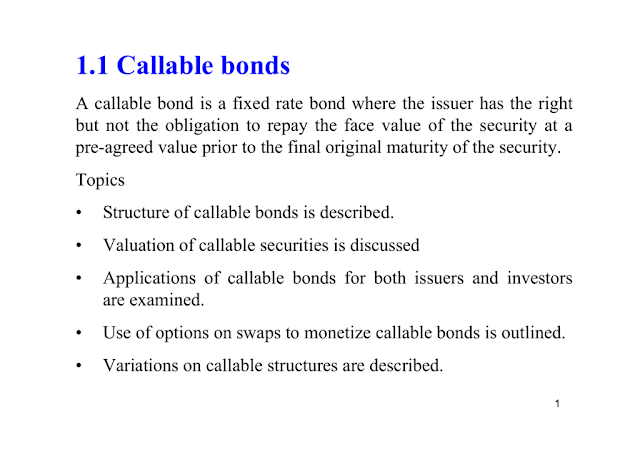 When issuers redeem callable bonds before the stated maturity date, they may call the entire issue or just part of it. For obvious reasons, the call provisions can, therefore, be referred to as in-whole redemptions or partial redemptions. The refunding is sometimes done through a direct exchange by bondholders of the existing bonds for the new issue. Usually, though, the issuer sells new bonds to pay off the existing issue.

When refunding an issue of bonds, issuers either perform a current refunding or an advance refunding. If the issuer uses the proceeds of the "refunding bonds" to promptly call (within 90 days) the "prior issue," we refer to this as a current refunding. On the other hand, when the issuer places some of the proceeds of the refunding issue in an escrow account to cover the debt service on the outstanding issue, we refer to this as an advance refunding. Because an escrow account is, literally, money in the bank, the prior issue whose debt service is now covered by the escrow deposit is not required to be included on the issuer's debt statement.

Do we just take the issuer's word the US. Treasury securities held in the escrow account are sufficient to cover the debt service on the prior issue?
No. Rather, an independent CPA issues a "verification report" verifying the yield on the escrow deposit will be sufficient to pay off the outstanding or refunded issue of bonds. Because of the certainty surrounding a refunded issue of bonds, these bonds are typically rated AAA and are among the safest of all municipal bonds on the market. Because of their inherent safety, refunded bonds are also liquid.

Refunding bonds are not tax-exempt. Municipalities, in other words, can borrow money on the cheap for infrastructure, but if they could issue tax-exempt refunding issues, some governmental entities would do nothing but issue refunding bonds in a never-ending attempt to maximize their budgets.