By Tamer Hamed - January 30, 2019
Common stock, on the other hand, is all about the profits a company makes. Unlike with bonds, common stock does not give the investor a stated rate of return. If shareholders receive 64 cents per share of common stock as a dividend this year, they might or might not receive that much next year. A famous toy maker just cut its dividend in half as it tries to turn itself around. And, many companies never pay dividends.

Both the income produced by common stock and the market value of the stock itself are unpredictable. Therefore, common stock investors should only invest the money they could afford to lose.

Bond interest is a fixed expense to the issuer paid to the bondholder. Profits at most companies are unpredictable and, therefore, so are the dividends and the market price of the issuer's common stock.

Rights and Privileges
Common stockholders are owners of the corporation and vote at all annual and special meetings. The owner of common stock has the right to vote for any major issue that could affect his status as a proportional owner of the corporation. Things like stock splits, board of director elections, mergers, and changes of business objectives all require shareholder approval.

Owners of common stock typically have the right to vote on:
•    Members of the board of directors.
•    Proposals affecting material aspects of the business
•    Ratifying the auditors.
•    Mergers & Acquisitions.
•    Stock Splits.
•    Liquidation of the company

One thing shareholders never vote on is whether a dividend is paid and, if so, how much. The board of directors decides if a dividend is to be declared from profits and, if so, how much the payment per-share will be. Dividends benefit the shareholder now, while the profits that are reinvested back into the business should eventually help to increase the value of the stock, benefiting the shareholder in the long run. 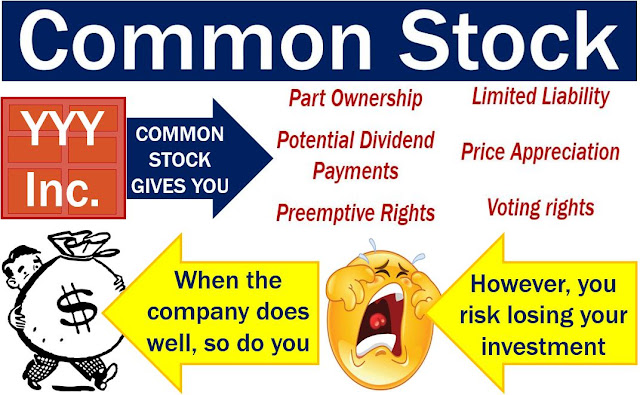 At the annual shareholder meeting votes are cast per-share, not per-shareholder. Therefore, a mutual fund holding 45 million shares of Wells Fargo (WFC) has a lot more votes than a retail investor holding 300 shares at the Wells Fargo annual meeting. In fact, the retail investor's vote is almost meaningless compared to what the mutual fund decides to do with their 45 million votes.

Either way, all shares get to be voted. If a shareholder owns 100 shares of common stock, he has 100 votes to cast in corporate elections. Let's say there are three seats up for election on the Board of Directors. There are two ways the votes could be cast.

Under cumulative voting, however, he could take those 300 votes and split them any way he wanted among the three candidates. He could even abstain on the other seats up for election and cast all 300 votes for one candidate. That's why cumulative voting gives a benefit to the small/minority shareholders. If they can get a candidate on the slate who will look out for the small shareholders, the minority shareholders can cast all their votes for that one candidate and shake things up.

Beyond voting, common stockholders have the right to inspect the corporation's financials through quarterly (10-Q) and annual (10-K) reports. Public companies must file these reports with the SEC, but even a shareholder in a private company has this same right. Shareholders may also see the list of stockholders and the minutes of shareholder meetings.

Common stockholders have a preemptive right to maintain their percentage of ownership. This means if the company wants to raise money in the future by selling more common stock, existing shareholders must get a chance to buy their percentage of the upcoming issue. If not, their ownership would be diluted. Investors buying the stock on the secondary market up to a certain date also receive rights to buy more shares from the additional offering.

Rights offerings avoid dilution of equity by giving owners a chance to maintain their percentage of ownership, if they choose to.

Should a corporation claim bankruptcy protection and have to be liquidated, com¬mon stockholders get in line for their piece of the proceeds. Unfortunately, they are last in line. They are behind all the creditors, including bondholders, and behind preferred stockholders.

But, at least they are in line, and if there are any residuals left, they get to make their claim on those assets, known as a residual claim on assets or "residual rights." Common stock is the most 'junior" security, since all other securities represent senior claims on the company's assets.

Shareholders have limited liability, which means they are shielded from the debts of the company and lawsuits filed against it. Unlike a sole proprietor whose business is going sour, shareholders of a corporation would not be sued by creditors. This is true whether the company is public or private.

As we mentioned, one of the rights common stockholders enjoy is the right to maintain their proportionate ownership in the corporation. We call this a preemptive right because the existing shareholders get to say yes or no to their proportion of the new shares before the new shareholders get to buy them. Otherwise, if you owned 5% of the company, you'd end up owning less than 5% of it after they sold the new shares to everyone but you, called dilution of equity.

For each share owned, an investor receives what's known as a subscription right. It works like a coupon, allowing the current shareholders to purchase the stock below the market price. If a stock is trading at $20, maybe the existing shareholders can take two rights plus $18 to buy a new share. Those rights act as coupons that give the current shareholders two dollars off the market price. So, the investors can use the rights, sell them, or let them expire.