By Tamer Hamed - January 28, 2019
If there is an old brick industrial building that was supposed to be turned into a major condominium and townhouse development back before the bottom fell out of the real estate market. Unfortunately, the developers borrowed $15 million but pre-sold only one condominium, sending the property into foreclosure.

So, the park district, whose land sits next to the foreclosed property, wanted to tear down the outdated structure for their operations. The park district needed $6 million to acquire and develop the property and, therefore, raised that amount by issuing municipal bonds. In a recent election, a majority of Forest Parkers voted to allow the park district to raise property taxes slightly to create the funds needed to pay off a $6 million bond issue to be used to better the community. 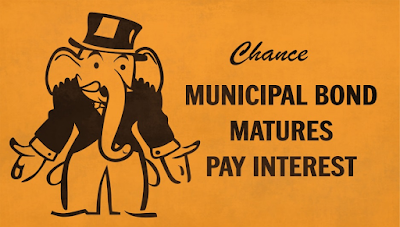 For us, all it took to see the connection between this municipal securities section and the so-called "real world" was to walk 15 steps to the front window and see that the building pictured below has now been torn down and carted away brick-by-brick, all because a municipal taxing authority borrowed money by issuing bonds.

There are two main types of municipal bonds: general obligation and revenue. General obligation bonds are safer than revenue bonds because they are backed by the municipality's ability to collect and raise taxes from various sources. However, some states are considered safer issuers than others, and the same goes for counties, school districts, port authorities, etc. Revenue bonds are only as safe as the revenue source tied to the bonds.

To make the bonds more marketable and keep interest payments as low as possible, many municipal bonds come with a credit enhancement from an insurance company who insures against default. If interest rates rise, bond prices drop. That is not what is covered here. The insurance policies cover interest and principal payments, not market or interest rate risk. Examples of municipal bond insurance (or assurance) companies include AMBAC and MBIA.
Because some municipal bonds are insured and some are not, bond ratings agencies including Moody's and S&P typically indicate whether a rating is "pure" or "insured." A "pure" rating is based on the credit quality of the issuer only, while an "insured" rating implies the credit quality is based on the insurance policy backing the bonds against default.

General Obligation Bonds
The phrase general obligation means the municipality is legally obligated to pay the debt service on the bonds issued. GOs are backed by the full faith and credit of the municipality.

Where does a municipality get the money they'll need to pay off the bonds?
If necessary, they'll dip into all the sources of general revenue available to a city or state or park district, like sales taxes, income taxes, parking fees, property taxes, fishing licenses, marriage licenses, whatever. And, if they must, they'll even raise taxes to pay the debt service on a general obligation bond.
General obligation bonds are backed by the full taxing power of the issuer, and that's why GOs require voter approval. As we said, Forest Parkers first had to approve a $6 million bond issue before the park district could do the borrowing and back up the loan with their increased property taxes.
States get most of their revenue from sales and income taxes, while local governments rely on property taxes. Since local governments (cities, park districts, and school districts) get much of their revenue from property taxes, a GO bond is associated with property taxes, called add value . That phrase means the property tax rises or falls "as to value" of the property.

If the millage rate is "9 mills," we multiply the assessed value of $200,000 by .009 to get a tax bill of $1,800. That $1,800 goes to support many different overlapping municipalities, for example: water district, park district, school district, library & museum district, village government, and county government.

Some municipalities limit the number of mills that can be levied against property. If so, they might end up issuing limited tax bonds, which means there are limits on the taxes that can be used to pay the debt service.

Maybe property tax rates can only go so high to pay the debt service on a GO, or maybe only certain taxes can be used but not others. School districts are often limited as to how high property taxes can go to support their bonds, while other governmental units have no such limits. So, if you see limited tax bonds, associate the term with GOs.


Revenue Bonds
Rather than putting the full faith and credit of the issuer behind it, a revenue bond identifies a specific source of revenue, and only that revenue can be used to pay the interest and principal on the bonds. Have you ever driven on a toll way or paid a toll to cross a bridge? What did you drop in the basket? A user fee. That money you put in the toll basket helped to pay the debt service on the revenue bond issued to build the toll way or toll bridge. If money problems arise, the issuer won't raise property taxes. They'll raise the user fees.

You don't like the higher tolls? Use the freeway. But, home¬owners aren't affected one way or another since their property taxes cannot be used to pay off revenue bonds. Facilities that could generate enough revenue to pay off the bonds include airports, convention centers, golf courses, and sports stadiums. The stadium where the New York Mets play their home games was built with the proceeds of a revenue bond. As an article in Bloomberg explains, "The Mets sold $613 million municipal bonds in 2006 backed by payments in lieu of property taxes, lease revenue and installment payments to finance the construction of Citi Field. The team also issued $82.3 million of insured debt in 2009, the year the 42,000-seat ballpark opened in Queens."

Unfortunately, the revenues a few years ago were significantly lower than what the consultants predicted. That caused the bonds' rating to drop. The next year, however, with attendance up 20%, the revenues improved just enough to boost the credit rating to one notch above junk. What about future seasons? Turns out, predicting the credit rating for the bonds is about as reliable as predicting where the Mets will place in their division each year.

General obligation bond ratings are based on the credit score of the issuer. On the other hand, revenue bonds are only as strong as the revenues generated by the project being built. When the revenues are tied to the success and popularity of a baseball team, it is not surprising the credit rating could be upgraded and downgraded many times before maturity.

There are other ways a municipality could identify specific sources of revenue for a bond issue. For example, if the residents of a county wanted their roads paved, the county could add a special tax on gasoline throughout the county and let motorists pay for the new roads each time they fill up their tanks. This special tax is used to pay the debt service on the revenue bonds, which are issued to raise the money required to pave the roads. That's an example of a special tax bond, a type of revenue bond.

Any tax not a property or sales tax is considered a special tax, including special taxes on business licenses, excise taxes, and taxes on gasoline, tobacco, hotel/ motel, bottled water, and alcohol. this kind called "sin taxes."

See how it works? They identify a future source of revenue, like tolls, ticket sales, or special taxes on gasoline. Then, since they need all that money right now, they issue debt securities against this new source of revenue they're creating. They take the proceeds from selling the debt securities and get the project built. Then those revenues they identified come in, and they use them to pay the interest and, eventually, the principal due to investors who bought the bonds.

Cities like Chicago and New York have public housing projects, which are under HUD, a unit of the federal government. Municipalities issue PHA (Public Housing Authority) or NHA (New Housing Authority) bonds to raise money for housing projects. The debt service is backed by the rental payments, which are in turn backed by contributions from Uncle Sam. PHAs and NHAs are considered the safest revenue bond because of this guaranteed contribution from the federal government. Sometimes they are referred to as "Section 8" bonds because something needs at least three names in this business.

Industrial Development Revenue bonds are used to build or acquire facilities that a municipal government will then lease to a corporation. These IDRs carry the same credit rating as the corporation occupying the facility. The issuing municipality does not back the debt service in any way. Again, the debt service will be paid only from lease payments made by a corporation, so it's the corporation that backs the debt service. As you know, corporations have been known to go belly-up occasionally. If they're the ones backing up the debt service, you can imagine what happens when they themselves no longer have any assets behind them.
And if it happens, the issuer won't be there to bail out the bondholders. While revenue bonds are only serviced by specific sources of revenue, a moral obligation bond provides for the possibility of the issuer going to the legislature and convincing them to honor the "moral obligation" to pay off the debt service. This is a moral obligation, not a legal one, and it would take legislative action to get the money authorized.