The main difference between the two is that open-end fund companies continually issue and redeem shares. When an agent finds an investor for an open-end fund, the fund issues new shares to the investor, which is why he had to sell them with a prospectus. Open-end funds don't do an IPO and then force shareholders to trade the fixed number of shares back and forth. Rather, they issue new shares every time someone wants to buy them, and they let shareholders sell back the shares when they are ready to redeem them.

On the other hand, closed-end funds issue shares just as any public company such as Facebook or Starbucks does. They do an initial offering, at which point there is a fixed number of outstanding shares. What if a shareholder wants to sell his closed-end fund this afternoon? He trades it the same way he trades any other share of stock. How much will he receive? Whatever a buyer is willing to pay. These things usually trade at a discount to their NAV, or at a premium. It just depends on the supply and demand for the shares, and since this is such a small part of the secondary market, the pricing is less than efficient.

And, since closed-end shares trade the same way GE or MSFT shares trade, investors can both purchase them on margin and sell them short. As we discuss elsewhere, "selling short" involves borrowing shares from a broker-dealer and selling them, with the obligation to buy them back and replace them later. If the price falls, you buy low after you already sold high. If the price rises, you're in trouble.

Another difference between open- and closed-end funds is that an investor would purchase, say, 100 shares of the closed-end fund and pay whatever that costs. For an open-end fund, he would cut a check for, say, $1,000, and see how many shares he ends up with next time they figure the NAV. In almost all cases, he will receive "full and fractional shares" with an open-end fund, which means that $100 would turn into 12.5 shares if the POP were $8.00. That little "point-5" of a share is the fractional share. For a closed-end fund, he would either buy 12 shares or 13 shares, not 12.5

Open-end funds only issue common stock to investors. Closed-end funds, on the other hand, issue preferred shares and use other forms of leverage, usually through bank borrowings or issuing auction rate preferred shares. These funds attempt to earn higher returns through such leverage, but the use of leverage also increases risk.

The investment objectives between an open-end and a closed-end fund could be the same. There are closed-end corporate bond funds, tax-exempt bond funds, aggressive growth funds, etc.

Nuveen Investments (www.nuveen.com) is the largest issuer of closed-end municipal bond funds. Why would an investor want those versus the open-end variety? Well, what happens to yield when the price of the bond drops it goes up, right? So, if he can buy someone's closed-end bond fund at a discount, he just goosed his yield a little bit. What about when he wants to sell his shares someday? No¬body knows.

Open-end funds would not have stock exchange listing fees, as their shares do not trade among investors on the secondary market. 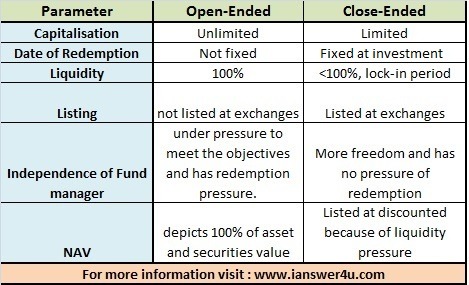 Although it's true closed-end funds have a fixed number of shares, investors in the fund can reinvest their distributions into more shares. And, there are rights offerings for closed-end funds if the board of directors decides to do an additional offering of shares. The difference is with open-end funds new investors can buy shares created on-the-fly by the open-end investment company.